The Famed Nigeria Cashew
A Treat For Exporters, Retailers, & Consumers

Nigeria's first cashew plantation dates back to 1954. It was an 800-hectare plantation located in present-day Enugu State and an additional 200 hectares in the Western part of the country. Since the liberalization of the commodity market in 1986, many companies have embarked on cashew production and export. Nigeria recognized the potential economic value of cashew and made a concerted effort to improve crop production.

Cashew is found both in the wild and in cultivation in 16 of Nigeria's 36 states, with an average annual production of around 250,000 tonnes of cashews. In its efforts to increase the production of cashews cashew, the federal government has launched a cashew development program that is currently

Nigeria is a force within the Western African cashew cultivation region, with an increasing market share in global cashew production, and an average annual production increase of five percent. In 2002, the country produced 30,000 tonnes of cashew nuts on a total farm of 50,000 hectares which was mostly small farms. The average growth in Nigeria cashew production increased to 555,000 tonnes in 2004. These were planted with varieties with an estimated yield of 1,000 kg ha. In 2010, Nigeria ranked 3rd among the top ten global producers of cashew nuts with a production of 594,000 tonnes.
Production of cashew nuts in Nigeria is only going one way, upwards. By 2030, the country is expected to be producing a whopping three hundred thousand metric tonnes of cashews. Cashews can be found in commercial exportable quantities in the Nigerian provinces of Oyo, Osun, Kogi, Edo, Niger, Kwara, Imo, and Enugu. In terms of location Ogbomoso, Iseyin, Oyo Town, Saki in Oyo State, Iwo and Ejigbo in Osun, Anyigba and Ankpa State, Auchi in Edo State, Lafia in Nassarawa State, Keffi in Niger State and Okigwe in Imo State, are the biggest cashew cultivators and exporters.
Outside of Nigeria, Nigerian cashews are generally divided into two groups - Ogbomoso cashews and others. Kogi State is the largest cashew producer in Nigeria.
Cashew is cultivated without the use of agro-chemicals in most Nigerian cashew farms and plantations. The organic nature of the Nigeria cashew is currently a source of pride. The use of chemicals is mainly done on an experimental basis. Efforts are being made to maintain the status by breeding cashew for their resistance to major pests and diseases. This, in turn, will prevent contamination from chemical pesticides. The widespread promotion of certified organic cashews is also improving the export value of cashew products and open up new markets for Nigerian exporters. Organic cashew-based snacks are in great demand, with sales increasing by over 80% per year in the US market.
Nigeria produces a limited variety of cashews which are mainly yellow and red varieties. However, high-yielding varieties of cashews with a low gestation period and larger nuts have been introduced.
A variety of cashew nuts from Nigeria called the 'Brazilian Jumbo' has nuts ripening in less than a year, unlike to local wild varieties which ripen after five years was introduced and has now become widespread.
Adverse factors influencing production and harvest performance including old trees, deforestation, low-yielding varieties, the dominance of smallholder farms and wild varieties, land acquisition, high cost of inputs, climatic conditions, diseases, pest and fire epidemics, post-harvest losses, infrastructure constraints, quality, the market price of the product and competition between local purchasing agents, have been mitigated to a large extent.
The industrially roasted Nigerian cashew nut kernels typically contain higher amounts of protein, fat, and potassium. Raw cashews contained higher amounts of vitamin A, fiber, Calcium, and moisture. The potential nutritional benefits of consuming cashews, especially raw cashews are tremendous, as they contain an appreciable amount of important micronutrients and fiber.
Get In Touch To Know Our 2021 - 2022 Price For Raw & Processed Benin Cashew Nuts

In Nigeria, the cashew production season is relatively long and runs from December to June. The cashew is stored, so the export continues throughout the year. The supply is therefore guaranteed.

Indeed, at any time, there are always different prices for different grades of Nigeria raw cashew nuts. 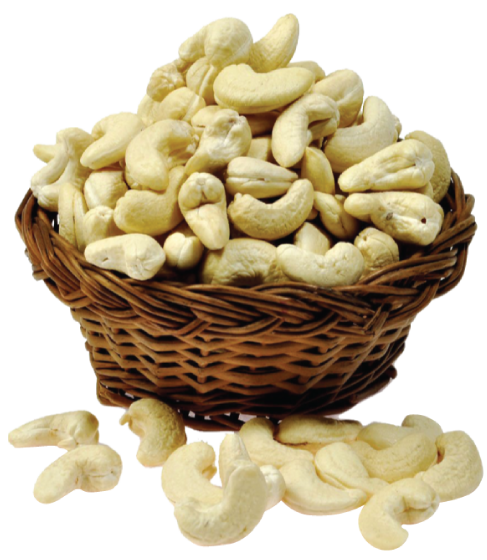 Raw cashews have to be very dry and have at most 10% moisture in order for them to be exportable. Rains result in the reduction of the quality of cashews. The rain causes a lot of premature cashews, spotted nuts and ultimately leads to a high number of defective nuts. Cashews are best harvested before the rainy season. To get the required level of dryness, they have to be dried in the sun. This is precisely why this process is carried out before the monsoon season.
However, they can still be prepared for export during the rainy season by making sure they are dried and packed before the monsoon, and when this is not possible or preferred, the nuts are covered well with tarpaulins that are specially made for this very purpose.
After the nuts have been dried properly, and a variety of machines have been utilized to test humidity, we let the nuts cool down to room temperature before packing them in a container for export. Not doing this will result in the expulsion of the moisture from the nuts during shipping. This causes the cashews to sprout, grow, and be spoiled as they travel over the sea and arrive at the destination port.
Cashews have to be properly prepared inside the container to ensure that all the care taken earlier in the process doesn't go to waste. SCashews doesn't make compromises when it comes to its containers as even a single small hole can spell the end. Our containers are always properly and fully dressed with just the right number of bags placed inside them to ensure adequate ventilation.
All exporting companies working with Nigerian cashew plantations are required to comply with the Sanitary and Phytosanitary (SPS) measures. By adhering to these best practices for food safety at all stages of the value chain, SCashews is able to deliver on its promises of -

Reach Out To Us!

Desperate to get your hands on high-grade, long shelf-life, and high nutritional value varieties of raw or processed Nigerian cashew nuts? Then, get in touch with us at SCashews, right this instant, and we’ll get a shipment of our finest out to you instantly!